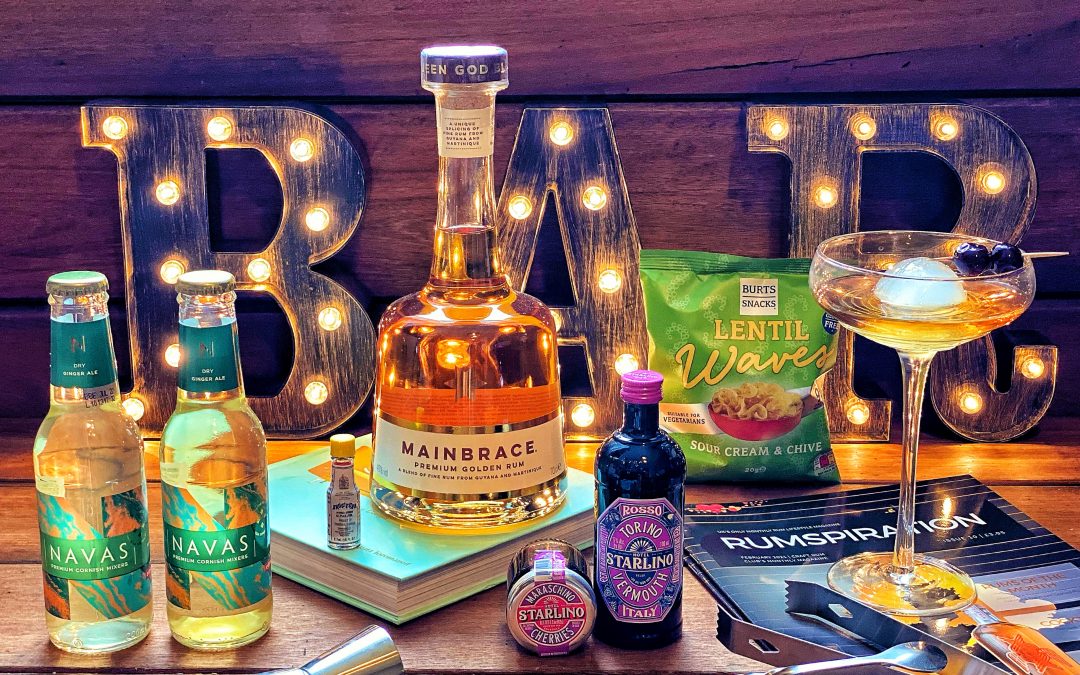 Februarys Mainbrace Rum is a premium golden rum crafted from a unique blend of two distinct styles and celebrates the resurgent British rum industry. Sourced from two of the finest distilleries in the Caribbean, the blend makes for a balanced, smooth, and versatile golden rum, soft enough for those new to rum, while offering a complexity that seasoned drinkers will enjoy.

Inside our February Box;

RUMSPIRATION MAGAZINE is celebrating British month and has articles featuring our rums of the month, x7 cocktail recipes including ingredients to build our cocktail of the month, food corner, interview with Wes Burgin AKA The Fat Rum Pirate and Craft Rum Club Radio hosts an electric mix by DJ Steve Nash of the loading bay crew.

Februarys Rum Box from MAINBRACE RUM is a blend of fine rum from Guyana and Martinique Traditionally crafted with a modern twist, Mainbrace is a unique golden rum. A premium blend of 2–5-year-old rums from three different stills in Guyana and an unaged Agricole from Martinique.

It is produced using locally sourced sugar cane, as well as traditional pot and column still distillation. The same methods and stills were used to create rum for the British Navy as far back as 1732. The rum speaks for itself and that is why there are no sweeteners or colorings added to the blend.

The blend originates from Guyana near the banks of the Demerara River in 1670 – a region that is home to its own eponymous variety of rum. It is crafted with rums aged between 2-5 years from three different stills, all bringing their own unique character and natural sweetness to the blend.

The first part of the blend comes from a double wooden pot still in Port Mourant. These stills have been making rum for the navy since 1732.

The second part is from the wooden Coffey still originally found at the Enmore Sugar Estate. This is the last still of its kind in the world.

The final part comes from an original four-column French Savalle still, dating back to the 18th century.

The Agricole part of the blend comes from La Favorite in Martinique, which was established in 1842 and is well-known for their punchy Agricoles even at low ABVs.

The initial earthy textures you experience when sipping Mainbrace can be attributed to this distillery.

The distillery is powered on a closed-loop system that uses the excess fibres (bagasse) of sugar cane to fuel its furnaces. These then create the steam to distil their Rhums making the distillery extremely sustainable. In fact, they are the last distilleries in Martinique still working purely from steam.

We hope you agree that Februarys Rum Box from Mainbrace is a great celebration of British innovation.